On December 22, 2017, and effective January 1, 2018, President Trump signed the Tax Reform bill into law. We at Proliant are producing a 6-part blog series going over a lot of the main talking points in an attempt to bring some real-life application to the complicated language of the Act itself. For now, let's dive into PEO's and how the new changes could make them a serious problem for your business.

Among many other changes this bill has brought into the business world, the one being discussed today revolves around outsourced labor strategies, including Professional Employer Associations or PEOs. The National Council on Compensation Insurance defines a PEO as “an entity or group of entities that provides the services of its workers to its client(s) through a PEO arrangement for a fee pursuant to an agreement, written or otherwise. Generally, if an entity provides the services of its workers, by contract and for a fee, to a client and any such services are not provided on a temporary basis, that entity will be considered a PEO.”

Looking past the attention-grabbing headlines about the elimination of the state and local tax deduction and the “postcard tax return” of the Tax Reform bill is §199A. This section, while small, may cause certain businesses to drastically rethink business entity selections, legal considerations, and employment strategies moving forward. However, to understand how §199A will affect your business, you must understand why it was introduced and the mechanics of how it operates. 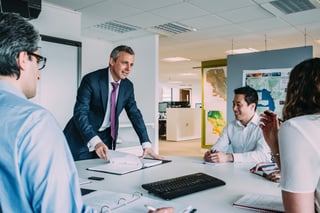 199A of the Tax Reform Bill

One of the most touted benefits of the tax reform bill is the corporate income tax rate being slashed from the top rate of 35% to 20%, which primarily only applies to C-Corporations, the vehicle of choice for most large businesses.  For those entities employed by the majority of small businesses, S Corporations, Limited Liability Companies, and other pass-through entities, the tax reform bill enacted a 25% tax rate on the income earned by these entities.  One could argue the introduction of the 25% tax essentially removes the “pass-through” nature of such entities as the tax is now applied on the income earned by such entity and is not passed through and taxed at the individual tax rate.  To bring parity between the C-Corporation rate of 20% and the pass-through rate of 25%, the tax reform bill created §199A.

It is also worth noting that income earned from “specified service trades and businesses”, including some of the traditional white-collar professions (law, medicine, accounting, financial services, consulting), is disqualified for the deduction if the above income thresholds are reached.

So why is this important as it relates to employment strategies?  Notice the above limitations are applied to W-2 wages paid at the pass-through entity, not general wage expenses paid.  Therefore, wages paid via employee leasing arrangements, staffing companies, and other off-balance sheet mechanisms would not count for §199A benefits.

Limited to the great

Now consider if your company was outsourcing its labor and had zero W-2 wages.  If that were the case, your deduction would now be $37,500, therefore losing a tax deduction of $162,500.

Other Factors to Consider About the 2018 Tax Reform Bill

There are other factors at play here that require careful consideration by your CPA (i.e. capital gains inclusion, REIT dividends, qualified property determinations, etc.) to see how the §199A deduction will affect your business in 2018 going forward.  As you discuss this change and other tax reform impacts affecting your business, keep in mind how the tax bill could directly affect your employment strategy going forward.

If you have questions about PEOs and the impact the Tax Cuts and Jobs Act will have on your business this year, feel free to reach out in the form below, and someone will follow up with you.

What to Look for in Online Payroll Services for Small Businesses